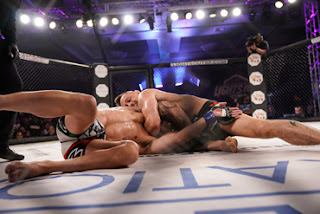 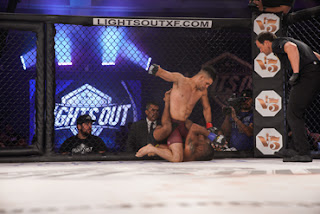 BURBANK, California - Chad George marked the end of his remarkable 15-year career with an arm triangle choke submission victory over Hector Valenzuela in the Lights Out Xtreme Fightingcage during LXF 2 on July 6 at the Burbank Marriott Convention Center. 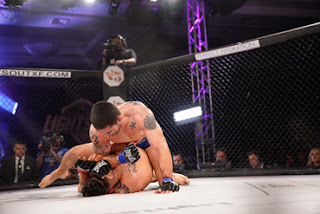 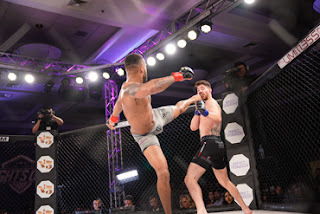 The LXF provided George, a Southern California staple and fan favorite to have a platform for his retirement fight, and the 37-year-old former Bellator and WEC veteran took full advantage of the opportunity. George dominated Valenzuela from stem to stern in his final swan song and finished his career with an 18-8 record, with a four-fight winning streak to boot. George had over 200 friends and family attend the fight and provide an electric fight atmosphere. For his cage walk, he was chaperoned by students from CMMA, the Los Angeles-based gym that he owns and operates. After his convincing victory, George placed his gloves in the middle of the mat and walked out of the LXF cage one last time, and announced that he's now fully committing himself to groom the next wave of up-and-coming MMA fighters.
Much like George's ambitions in developing the generation of MMA talent, the LXF's mission is to offer athletes from other sports a platform to step into the cage and pursue their dreams as fighters. 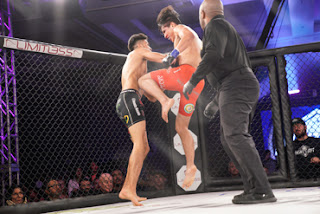 Former NFL defensive lineman Chris McCain seized the opportunity and took the stage in his MMA debut with a TKO victory over Jamal Harris. McCain, who played 35 career games for the Chargers, Dolphins and Saints, looked every part fighter in his two-round destruction as he put on a powerful performance in front of his childhood friend and former teammate Keenan Allen, and other football luminaries like Lavar Arrington. 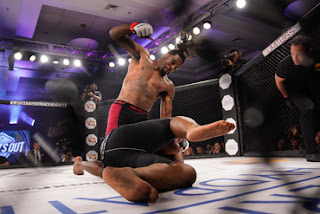 With the help of former NFL legend and LXF co-founder Shawne Merriman, McCain wore his Chargers jersey during his post-fight celebration, but made it very clear afterward—MMA and the LXFis his new career. 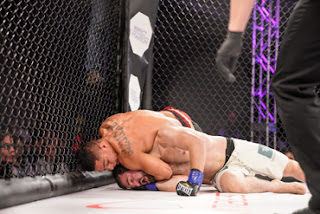 LXF, a reimagination of the long popular California Xtreme Fighting (CXF) league, also crowned a new heavyweight champion when it awarded Jay Silvathe title. During the Friday weigh in, May and Silva were involved in a scuffle that forced the California State Athletic Commision to levy a fine and suspension. May did not accept the fine of his purse for the fight, so the tilt was called off, and it forced a change of hands in title to Silva.

In a separate title fight, former CXF champion AJ Bryant defeated Jared Papazian via second round knockout. Bryant, who was two pounds overweight, however, could not claim the title due to the discrepancy. Papazian, a former King of the Cage champion and UFC veteran showed no signs of rust following a two-year layoff and looked every part game for the fight in a competitive first round. He was caught, however, with a right from Bryant and collapsed to the mat shortly after where his opponent finished the fight in exhilarating fashion.

Six other action-packed fights rounded out the second installment of LXF.
Knockout machine Alfred Khashakyan scored his tenth career victory and defeated Keith Carson via first round TKO. It was Khashakyan's second-consecutive first-round victory for LXF.

Following a loss at LXF 1, Julian Baez got back into the win column and defeated Roberto Romero by unanimous decision (30-27 x3).

Gilbert Nakatani scored a come-from-behind win over Mykola Aivazian with a second-round bulldog choke in a battle between two combatants with a wrestling-heavy background.

Blake Bilder survived a cut over his left eyebrow and took the fight to the ground for three grueling rounds and defeated Derion Chapman by unanimous decision (30-26, 30-27 x2).

Alex Trinidad bloodied and dominated Brian Del Rosario with several takedowns and followed up with impressive ground and pound en route to a unanimous decision victory (30-25, 30-26, 29-27).

With judo legend Gokor Chivichyan standing in his corner, Sergio Perez survived a scare when he was almost choked out to defeat Taylor Alfaro with an armbar in round 3.