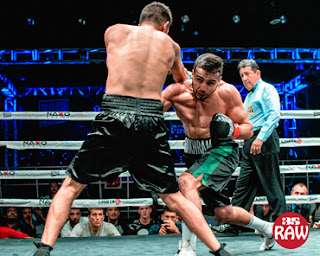 You never know what you're going to get at a Bash Boxing show. Returning to its original home at Florentine Gardens in Hollywood, fans were treated to not only 10 pro boxing matches, but also a professional wrestling intermission 6-man tag team and a live “mini” reenactment of the Manny Pacquiao vs. Lucas Matthysse fight, conducted by two little people. 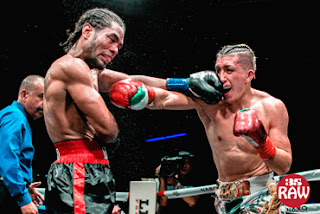 In the pro boxing action, Uzbek Olympic silver medalist from the 2016 Rio games, Shakhram Giyasov (3-0) scored a 1st round knockout over Daniel Echaverria, who drops to 19-6 with 17 Knockouts. A devastating body punch dropped the Mexican fighter just past the one minute mark of the first round. Echeverria stood up well in time but spit out his mouthpiece. Referee Raul Caiz Sr. proceeded to suddenly stopped the fight. Echevarria's Corner protested, but to no avail. Giyazov is now 3-0, 2 KOs while his three opponents have a combined record of 53-17. 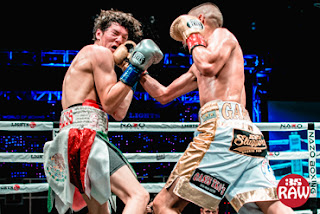 In the co-main event, local hero Jessy Martinez made it a perfect 10-for-10 in his young career, scoring a fourth round stoppage over Cuban Yunier Calzada. Calzada had never been stopped in his previous nine fights and showed his might over the first three rounds of the fight. But Calzada was badly rocked in the fourth by Martinez, which prompted “El Mago” to unload a barrage of punishing blows until referee Ray Corona stepped in to stop the contest. Martinez is now 10-0 with 7 knockouts, while Calzada falls to 6-4-1. 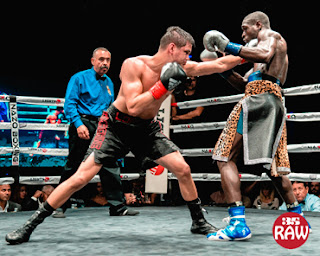 Welterweight Damien Lopez, 6-0-1-4 KOs, of Burbank, California, scored his second consecutive later round TKO in the most entertaining scrap of the night. This time it was over Liberian import and local L.A. Fighter Isaac Freeman. Freeman, now trained by former gold medalist Henry Tillman, exhibited an aggressive come-forward style heart and landed several flush shots on Lopez. But Lopez gradually wore down Freeman and the bout was stopped with Freeman helpless along the ropes in round 4. 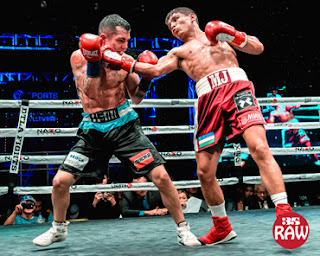 Rudy Garcia moved to eight wins without a loss, as he scored a shutout 6 round decision over Edward Ceballos, 7-3-1-3KOs. Ceballos deserved a little bit better on the scorecards, but the right man got the decision. Good action throughout, as Garcia showed maturity that belied his 21 years, cutting off the ring very effectively. 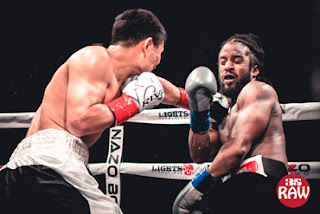 Murodian Akhmadeliev (“MJ”), thoroughly outboxed Argentine fighter Luis Fernando Molina.  Southpaw MJ was a bronze medalist in the 2016 Olympics for his native Uzbekistan and showed his pedigree throughout the contest. MJ did an excellent Sergio Martinez impression against his Argentine opponent, fighting with his hands down and proving very elusive with his movement. A bit too much showboating cost MJ a point when some of his shots fell below the belt. But the entertaining MJ still shutout the game Molina, improving to a perfect 3-0 as a pro. Molina drops to 7 wins, 5 losses and one draw with two knockouts.

In opening action, Salvador Perez, 4-0-1, received the first blemish on his career, as he was held to a draw by spoiler Kevin Shacks, 2-2-3, 2KOs in a 4 round welterweight bout.  Not a bad decision, but one could have made the argument for Shacks getting the nod on the scorecards. Good body work by both men. 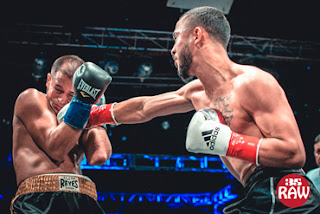 Southpaw Alexey Mazur showed maturity in winning a unanimous decision over Markus Jones in a junior welterweight fight. It was a more competitive affair than the scores indicated but in the end, the fighter from St. Petersburg, Russia had the superior skills, counterpunching, and experience. Jones is now 1-2, while Mazur is 2-0, 1KO. 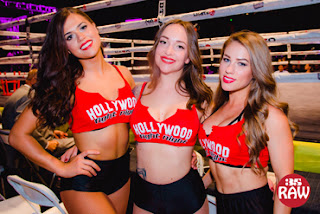 Steven Pichardo overcame a rough first round against veteran spoiler Evan Torres to take a 4 round majority decision win. Pichardo, of Torrance, finally figured out his aggressive opponent and established distance with the jab, while also landing hard shots inside. Torres dropped to 7 - 6, with 5 Knockouts. Pichardo is now 4-1, with three straight wins.

Israel Mercado scored a first-round knockout at 2 minutes and 39 seconds over Daniel Bastien in a lightweight fight. Bastien was staggered all over the ring, and finally dropped with a temple shot, after which the bout was stopped. 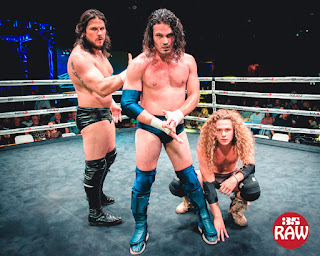 Darel Harris, 1-3-1, looked merely to survive against Ashkat Ualikhanov.  The Kazakh fighter, who was disqualified in his debut, has now won three straight. Harris was penalized a point for refusing to engage in round 4. 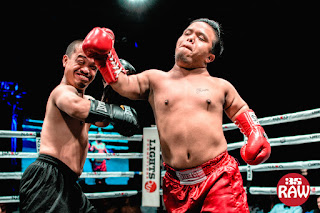