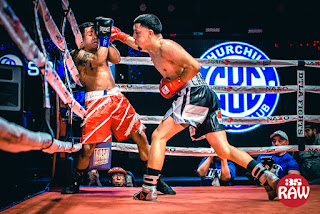 Once again, the punches were flying in bunches at one of the hottest clubs in in Downtown Los Angeles , Exchange L.A.. PR Sports, Bash Boxing, and Churchill Boxing Club teamed up to present the inaugural Churchill Challenge.  Eight professional bouts, a live music act, a capacity crowd, and an awesome atmosphere for boxing engulfed DTLA last Thursday night. 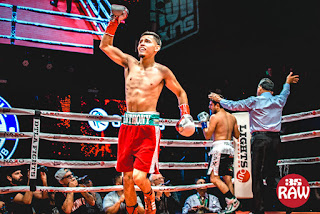 In the Fight Of The Night, Burbank’s favorite son Damien Lopez remained unbeaten as a professional, dispatching WSB veteran Siddharth Varma  by  4thround knockout.  The aggressive Varma seemed to catch Lopez of guard with his volume in the first round and had Lopez’ large contingency of fans worried.  Varma even began showboating and taunting Lopez as the two duked it out in an entertaining back and forth brawl.  But Varma began to fade late in the third round as Lopez began imposing his will.  After eating a nasty liver shot from Lopez in the fourth, Varma appeared to freeze and doubled over in pain in the middle of the ring.  After admiring his work for a moment, Lopez swarmed in as Varma collapsed in a heap.  Referee Rudy Barragan waived the fight off without even issuing a count.  Lopez improves to 7-0-1 with the KO win over the game Varma (4-2-1). 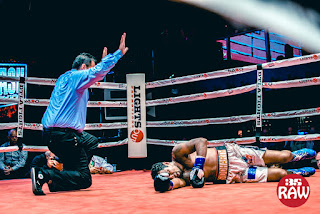 In the closest bout of the evening, Gloferson Ortizo and unbeaten Mario Esparza went toe-to-toe for 6 rounds before needing the judges scorecards to sort things out.  Ortizo was able to score effectively when working at range, however his tenacious opponent kept breaking down that range by creating angles and landing effective counter punches.  Judge Kristi Rosario had Esparza taking the bout 58-56, while Judges Marty Denkin and Timothy Hick both saw the bout 58-56 the other way and awarded Ortizo a razor close split decision victory.  Ortizo rebounds from his only loss as a pro and improves his record to 13-1-1 while Esparza suffers his first defeat to go to 4-1-2. 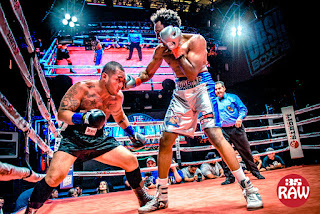 Super featherweight prospect Adan Ochoa (7-1) dropped his opponent James Thomas (6-4) early with a nasty flurry that pretty much set the tone for the rest of the fight. The long and lanky Thomas did his best to stay in the fight, firing missiles that had previously resulted in all six of his wins coming by knockout.  But Ochoa withstood the Thomas’ assaults and knocked him down again in the third round.  After Thomas rose slowly to his feet, Ochoa put together the fight ending combination that dropped Thomas for the final time as Referee Raul Caiz Sr. stepped in to call the bout. 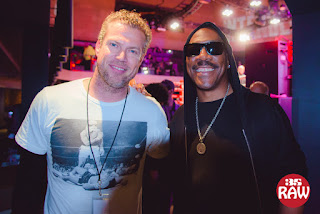 Local fan favorite “Bad News” Brandyn Lynch emerged victorious in a tough 6 round decision against upset specialist Tavorus Teague.  Lynch kept trying to work his way inside to get to the body of his opponent, but the elusive scrapper Teague kept utilizing frenetic movement and awkward angles to keep himself out of harms way every time Lynch would engage. Showing excellent patience Lynch refused to be lured in and did not over pursue Teague, instead he kept boxing at range looking for an opening. The strategy paid off in the fourth round when Lynch caught Teague flush with a heavy shot that dropped him to the canvas. Teague quickly brushed off the knockdown but was unable to get his offense going as Lynch cruised to the unanimous decision victory (60-53 on all three scorecards) and a 6-1 professional record.

Undefeated Kareem Hackett treated his loud and boisterous crowd of supporters to his fourth win against the heavy handed David Damore.  Hackett found success early, working effectively behind his jab and continuously peppering his shorter opponent with long snapping shots. Damore walked through most of the shots unfazed, but the accumulation of blows began to leave their mark. Unable to put his opponent away, Hackett found himself relying on the judges for the first time in his young career but was awarded every round on the scorecards.

18 year-old Anthony Garnica (1-0) made a successful professional debut, and did so in quick fashion needing only 2:37 to earn his first victory at the expense of Obed Fernandez (0-3).  Despite outweighing Garnica by nearly 5 pounds at the weigh-in, Fernandez was on the defensive early and often and appeared overwhelmed with the reach of his taller opponent.  Garnica continually tattooed Fernandez with long straight punches to the head and dropped him with multiple shots to the body.  After Fernandez answered the referee’s count, Garnica continued his onslaught and finished the fight with the very next combination he landed.

East Los Angeles native Ruben Campos came out with both gins blazing despite receiving a nasty head-butt from veteran Thomas Herrera that left a gash on his forehead and prompted a brief stoppage. Campos showed excellent composure after the incidental blow and stayed true to his game plan. Herrera kept charging forward until Campos dropped him with a blistering combination. Referee Rudy Barragan allowed Herrera to survive another knockdown but then ended up stepping in to stop the bout at 2:27 of the very first round.   Campos improves to 5-0.

In a battle of winless fighters, Ivan Ortiz got off the schneid with a one-sided unanimous decision (40-36 on all judges scorecards) against Patrick Gutierrez.  Ortiz improves to 1-1-1 while the game Gutierrez will continue to look for that elusive first victory.